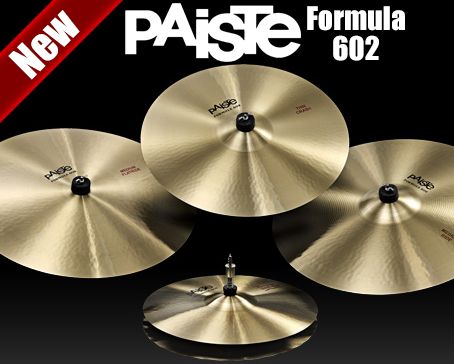 Back to the Roots

Back in 1959 Paiste launched a series that was destined to become one of the world’s most revered in the history of cymbal making – Formula 602.

Its fine, pure and always controlled musical tone was adopted by well-known drummers and percussionists including none other than Joe Morello, Art Blakey, Paul Motian, Ndugu Chancler, Jon Hiseman, Charlie Watts and a host more. Formula 602s were especially coveted as the ultimate cymbal in jazz, the burgeoning beat and rock music of the times, avant-garde and acoustic genres of music for more than three decades. Demand began falling away with the advent of increasing volume through amplification and electronic music, and production of the Formula 602 series ceased in the 1990s. The warmth of the traditional CuSn20 bronze and the superior sound quality are back in demand, however – hence the reintroduction of the most popular Formula 602 range of models.

The 16” and 18″ Thin Crashes are sensitive, fast-responding cymbals for full accents with silvery highs. The bottom cymbal of the 14″ Sound Edge Hi-Hat features subtle ripples for rapid evacuation of the air, resulting in a concise ‘chick’ sound. The stick sound is light and sensitive, making the hi-hat perfect for studio work. The optimum balance of richness, solid bottom, clear ‘ping’ and opulent sustain makes the 20″ Medium Ride the ideal all-round ride in quiet to medium-loud settings. In 1968 Paiste invented the ride without a bell, and the 20″ Formula 602 Medium Flatride became the classic forerunner. The fine, pulsing ‘ping’ with silvery highs of this cymbal, which always remains under control, is legendary, and many attempts were made to copy it – to no avail. Now it’s back for enjoyment.